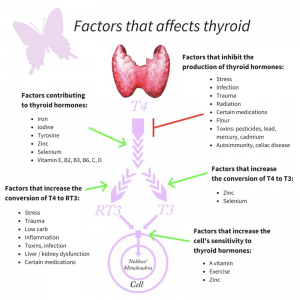 How you (unconsciously) destroy your metabolism

I am seeing more and more clients and students who have been diagnosed with Low Thyroid but do not experience much improvement after starting medication. Or who have all signs of Low Thyroid, but who are not receiving the right diagnosis and treatment – leading to great frustration.

It seems that there is currently an increase in the number of metabolic diseases. Perhaps due to the fact that in these years we are becoming more and more aware of the symptoms. Especially when celebrities arrive at the front page of the newspapers with their chronic diseases?

Therefore, today you will be seeing a small selection from The Hormone Diet (only available in Danish), where we also look at metabolic hormones among many other hormonal imbalances.

Do you have Low Thyroid?

The thyroid gland is the main gland of the endocrine system. It determines the basic metabolism of the body. As such, one of the most visible signs of thyroid gland malfunction is low body temperature (below 37 degrees) and related to this: intolerance to cold. Swellings along the jaw line and around the eyes are among other revealing signs such as:

These symptoms are all common symptoms of thyroid dysfunction. Most people regard the thyroid gland as only responsible for proper metabolism, but this gland plays an important role in hundreds of body functions.

The biggest mistake in diagnosis is that we focus exclusively on the measurement of the body's overall metabolic hormone, TSH. Unfortunately, these blood tests are not good enough to detect type II hypothyroidism (Low Thyroid). If the tests here are normal, the patient is often not heard. However, you may have Low Thyroid if the levels of thyroid hormones T4 and T3 are not regulated. T4 and T3 are the major metabolic hormones. T4 is converted to T3, which has 4-5 times higher biological activity.

The metabolism is controlled by the brain through the pituitary gland that produces the hormone, TSH, which stands for: "Thyreoidea  Stimulating Hormone". TSH stimulates thyroid hormone production of metabolic hormones T4 and T3.

The brain sends a signal to the thyroid gland, which then increases the production of T4. Out of the cells, T4 can either be converted to T3 or rT3 (reverseT3). T3 and rT3 compete for a space on cell receptors inside the body. Many lifestyle factors affect the conversion of T4 to T3 (or rT3). You have the ability to actively influence and as such increase cell susceptibility to metabolic hormones (read about them further below).

Many doctors currently only use TSH as an indicator of metabolism, but for example, in the case of Hashimoto, TSH will usually be within the normal range, even if there is a problem. If you suspect an autoimmune response, it is important to measure the level of antibodies (TPO).

Your own doctor or a complementary therapist can measure your metabolism.

Factors that affect your metabolism

Low Thyroid doesn’t only affect your weight since metabolism affects all functions of the body. In case of Low Thyroid, many functions in the body are affected. You may experience symptoms like coldness, constipation, slow heart rate, deeper and hoarse voice, slow walking and you may have difficulty focusing and concentrating. There may be pain, tingling and stinging in your fingers, joint rigidity, increasing weight and hair loss. For some women, the menstrual period becomes stronger, for others they are completely absent and it may be harder to get pregnant. Low (and too high) Thyroid increases the risk of abortion. If you have had multiple repeated abortions, your doctor or gynaecologist should test your metabolism. Your mood can also be influenced. You might feel more discouraged or even depressed.

Many factors may inhibit the conversion of T4 to T3 (or rT3):

E.g. lack of zinc, selenium, and lack of certain liver enzymes. Disease and epileptic medicine may also affect the transformation of metabolic hormones.

Zinc, selenium, and iron are necessary for the conversion of T4 to T3.

However, you should not take extra iron supplements unless you have taken a blood test confirming that you have iron deficiency. Iron deficiency may increase the formation of reverseT3, which inhibits the active metabolic hormone T3.

Iodine is essential for metabolism. If you use sea salt and eat fish, seaweed, and shellfish, you also get enough iodine. You should not take supplements of iodine before you have been tested for iodine deficiency. It can be tested through a urine test by complementary therapists. Both high levels of iodine and low levels of iodine can adversely affect metabolism.

Some foods contain substances (goitrogens) that block the entry of the iodine into the metabolic hormones.

If you have Low Thyroid due to iodine deficiency, you should avoid peanuts, peanut flour, and peanut butter, soy products, spinach, cabbage (all kinds), buckwheat, mustard leaves. Fluorine has a significant influence on metabolism, and the inorganic form of the mineral accumulates throughout life. Fluorine is easily attached to the sides of the thyroid gland where iodine would otherwise settle and block the effect of iodine. Fluorine inhibits the conversion of T4 to T3.

Coconut oil is a good fatty acid for metabolism as it contains intermediary fatty acids (MCT). These fatty acids can increase metabolism and promote weight loss. Coconut oil also withstands heating. The fatty acids in the coconut can help restore healthy cell walls and increase enzyme production, including enzymes that help with the conversion of T4 to T3.

Lack of selenium and zinc inhibits the conversion of T4 to T3.

Vitamin D3 has an important influence on the normal function of the immune system and counteracts the development of autoimmune diseases.

Exercise increases the formation of metabolic hormone in the thyroid gland while making the tissues more sensitive to the metabolic hormone. But skip the marathons and spinning. Instead, do intensive and short-term exercises such as HIIT (High-Intensity Interval Training) and Tabata.

Sleep: The natural hormone-like signaling melatonin that is formed in the pineal gland during sleep can have a very positive effect in autoimmune diseases. Be sure to be in your bed at 10 pm every evening, to produce sufficient amounts of this hormone.

Certain drugs reduce the amount of melatonin. These include, for example, acetylsalicylic acid, ibuprofen, and similar arthritis agents, blood pressure lowering agents, beta blockers, and calcium blockers, sleeping pills, and tranquilizers. That goes for coffee, tobacco, and alcohol as well.

Try to avoid gluten for a period of time. Gluten sensitivity has been shown to affect metabolism.

Hypoadrenia: Low or swinging production of cortisol (which is often the result of prolonged stress, disease, infections or severe stress) inhibits the effect of metabolism, and treatment with Eltroxin et al. increases the breakdown of cortisol in the liver. Therefore, it is important to ensure a normal adrenal function with sufficient cortisol formation before starting treatment with too low metabolism. Otherwise, treatment with, for example, Eltroxin will exacerbate symptoms of low corticosteroid deficiency, e.g. low blood sugar, diabetes, fatigue, etc.

When there are not enough metabolic hormones, the body's influence from oestrogens increases. Metabolism hormones are important for the formation of the hormones progesterone and the parent hormone pregnenolone. There is often too little progesterone and pregnenolone when the thyroid gland does not function properly (which in itself can cause a range of symptoms ranging from PMS, mood swings to concentration problems and memory problems)